The following post details how to set up and shoot a good quality interview with the equipment we have available at The Delta School. It can be a pretty tricky process at first, but once you get the general rules down, it’ll be smooth sailing!

4. With your interviewee sitting down, you can mess with different camera angles until you get the shots that you like. Typically, you’ll at least want both a close up shot and a medium shot. The close up shot consists of the subject’s head and shoulders, while the medium shots are from the waist up. If you don’t know the rules of framing shots, I’ll include a video below that details the process.

5. Finally, you can begin recording. Don’t be afraid to pause the interview for a short time if you need to change camera angles or remove obstructions!

Setting up the Lights 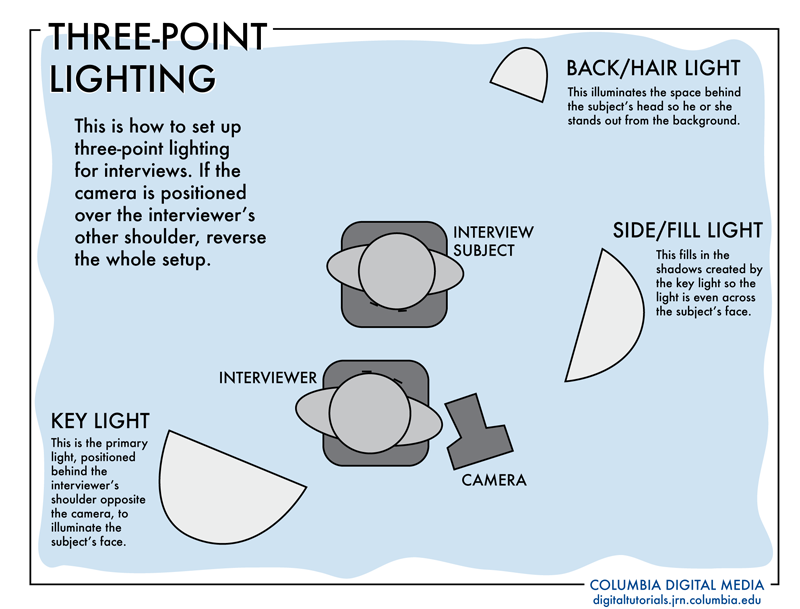 4. Finally, check the cameras again to make sure that the lights aren’t reflecting off of any surface and the subject still looks good. Make changes to the lighting composition as necessary.

3. Next, ask the interviewee to run the lapel mic up their shirt and clip it to their collar. Plug headphones into the Zoom, put them on, and listen to the interviewee speak. If all is good, then you should be ready to go.

4. Finally, you can start recording by pressing on the big red button on the front twice. To stop recording, you press the square stop on the front. To be safe, I’d advise you bring something to record backup audio, such as an iPhone. You should also frequently check the Zoom device to make sure it’s still recording.

If you’ve followed these steps, you should be on track to film great interviews! Best of luck!